Join the forum, it's quick and easy

Fate lies in your paws..

You are not connected. Please login or register

How to RP a cougar. 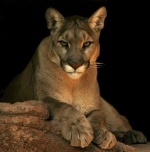 How to RP a cougar.

HINT: If a user has some type of stars under there username, that means you can trust them, they are the offical staff of PoundingPaws.

Can Healers have mates? The answer is yes, they can, they can have kittens aswell.

First off, let's start by learning all about the cougar species:

Description: Cougar, Mountain Lion, Puma, Panther, they have many names. A Cougar is a large tan colored cat or pitch night black, there is also a rare albino cougar species, they can be white but they MUST have pink eyes, there offspring has a slight chance of being an albino aswell. They can weigh between 100 – 145lbs. They have thick fur, and very little body fat. The eye colors can be dark cobalt blue, bright blue and very light blue, yellow, greeny yellow, light green, bright green (rare).

Habitat: Cougars used to live all over North America, but they have been hunted to extinction in all but a few areas. They like to live in wild places like mountains, forests or swamps.

Diet: Cougars are predators. That means they hunt other animals for food. Their favorite meal is a deer. Cougars eat up to ten pounds of meat a day. That’s 40 hamburgers!

Reproduction: [i]Mountain lions are solitary except for a short breeding period of up to two weeks duration. The gestation period is about 3 months. The number of young ranges from two to five, averaging three. At birth, the kittens are woolly, spotted, have short tails, and weigh about 450 g each. They develop teeth when about a month old, are weaned when about 2 or 3 months old, and may remain with their mother until more than 1 year old. Adult females usually breed for the first time between two and three years of age, and breed once every two or three years afterwards. They may live for 15 - 18 years in the wild.[i]

Cougars are the largest cats that can purr! They sound very pretty.

Cougars are great jumpers. They cat leap vertically over 16 feet, and horizontally more than 45 feet. That means they could jump over a school bus the long way.

They are the fastest animals in North America. They can run up to 40 miles per hour.

(Disclaimer: I did not type this part, I take no credit whatsoever.)

Here are the ranks of the cougars that are with in a tribe.

Leader - Leaders of the tribes. The leaders word is law.
Deputy - Second in command. Assists the leader.
Healer - If a member of the tribe is injured this cat heals them. They have there own den that they share with the healer to-be. They collect herbs and store them in there den.
Healer To Be- The Healer To Be shares a den with the Healer(s), The Healer To Be is in training to become a healer, once the healer thinks the healer to be is ready, they will tell the leader to give them there ceremony and the healer to be will become a full healer.
Elder - Eldest of the tribe. They are fed before anyone in the tribe.
Senior Warrior - A valued warrior that has made a very deserving contribution to the tribe, the leader will give them this title if they think they deserve it.
Warrior - Hunts and fights for the tribe.
To-be - Training to be a warrior.
Kitten - Stays in the Nursry, nurses from mother.
Queen - Mother of kittens. Is either nursing or expecting kittens. Stays in the Nursery until her kittens reach the age of 6 Seasons.

Loner - Does not belong to a tribe, hunts and lives on un-marked territory.

The most frequently asked question in this category is 'Do I have to name my character like the cats from the tribes in the books?' The answer is: No, you do not. The names are only one word, not two like warrior cats. Please do not name your cats like 'Pine that clings to rock' or 'Lark that sings at dawn.'
The names can sound african, like; Hooba, Zahra, Domo.
Here are some good, un-used names..

More will be added when I think of them.

Cougars can meow, there like cats, bit big cats, so when your RPing you can say; [insert characters name here] meowed. "We need more members!" He flicked his long, thick tail. His thin, white whiskers twitched nervously. They can battle other cougars aswell.

They are accepted, but remember, you are not allowed to kill another person's character(s) without there permission. Also, do not do battles vicously or unrealistically. Here are some good, humane, and classic battle moves, follow this link: https://poundingpaws.canadian-forum.com/f6-battle-techniques-moves

REMEMBER, They live on foresty mountains/hills so they don't see many diffrent varieties of birds. [justify]
Current date/time is Wed Feb 01, 2023 3:43 am